Statistics and figures vary quite drastically when discussing the most spoken languages in the world.

Whilst the stats and figures vary, there seems to be consensus as far as which languages we’re referring to. This kind of insight is invaluable when considering your multilingual marketing efforts. Gaining maximum penetration and reach of the content being translated is the goal. Choosing the right language and dialect for the region is obviously paramount.

Thereafter, professional translations by mother-tongue linguists, based in the country of the respective language, is a must for quality translations.

So, if you’re looking for a start as to which languages would garner the most penetration and thereby reception of your content, be it an e-learning course or website (for example) that you’re translating, this would be a good place to start.

However, it’s also very important to do your own, in-depth analysis of the prospective regions you’re marketing to, for a better understanding of which languages would be best suited.

So, we’re looking at, across a wide range of sources, the most prevalent languages the planet. Let’s start with the Middle-Eastern and South-Central Asian languages. 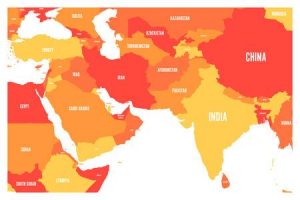 Countries of prevalence: India and Pakistan

Countries of prevalence: India and Pakistan

Hopefully, these figures provide some insight into prevalent Middle-Eastern and South Central Asian dialects, and thereby, the best languages to translate into when marketing in those regions.

Our next blog will focus more on the most spoken Asian languages. Our linguistic teams are always available for any insight or consultancy you may need when trying to decide the best languages to translate into for a specific region.